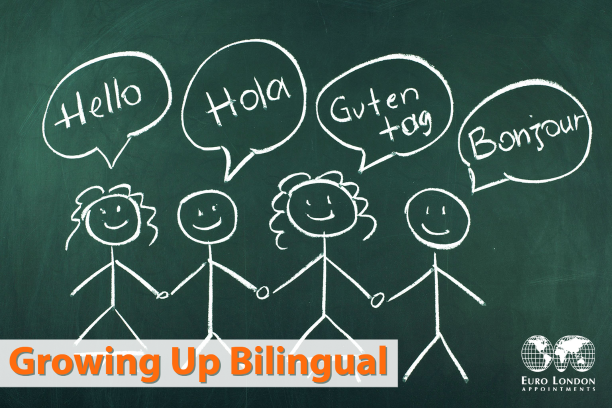 Children learn languages much faster and easier than adults do. All tips and tricks for ensuring your child grows up speaking more than one language agrees that the earlier they start learning a second language, the better. Euro London Appointments is made up of consultants who grew up bilingual, learnt second languages later, or learnt multiple languages are various stages of their life. All agree however, that these language skills have been an incredible asset in life.

I was born in Germany but moved to the UK when I was 3 years old. I already had a head start with my English as my parents are both bilingual and spoke English and German around me. My Scottish Granny noted that I spoke “Ginglish”, with half my sentence in German and half in English. As I grew up, I grew out of the mixed language sentences and learnt to divide the two, but it wasn’t without issues.

My spelling and grammar were poor in both languages, and while I was able to speak both languages fluently it took a lot of effort to learn the difference grammatical systems. Reading and writing in German was much harder for me than in English. This came from my Mother Tongue having progressed to a second language and English became my predominant daily language. To try and counteract that, my parents changed a few things in our daily lives and here are some of the tips that worked for us!

There is no magic formula for raising a bilingual child, but these are some of the things that worked for me. Growing up eating German and English food, celebrating a mix of English holidays and traditions as well as German, and being constantly surrounded by both languages means that I grew up very aware and proud of being bilingual.