Hiring a Chinese speaker? Which language variety do you need? 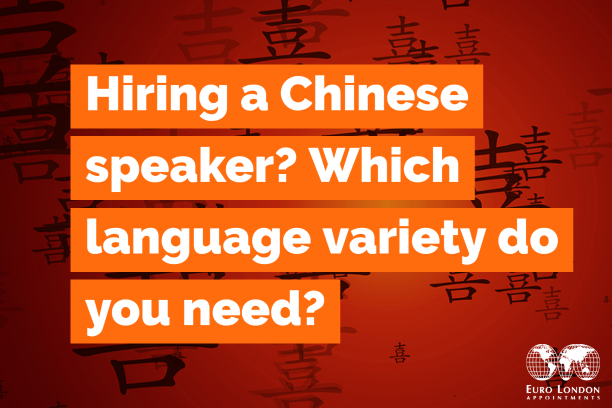 When you are looking to hire a Chinese speaker to support your business, the terms “Mandarin”, “Chinese”, “Cantonese” “Simplified Chinese” and “Traditional Chinese” may all appear in people’s CV or LinkedIn page. You may find yourself wondering, “why there are so many terms?”, “what’s the difference?”, and the most importantly “which is the one I’m looking for?”

Not to worry, I will answer all these questions. In this article I will not go into too much depth on linguistic intricacies, but I will give you a practical guide for hiring Chinese speakers.

When it comes to the language of Chinese, there is a fundamental linguistic concept that will provide clarification for all the confusion. Chinese is a logogram language. It basically means the writing and speaking systems in Chinese are separated. Each Chinese character in writing has its own meaning rather than just reflecting the pronunciation in speaking. Since Chinese is the only logogram language in use, you may find some confusion you do not come across when hiring other language speakers.

The two systems share some of the characters, most of the grammar and the vocabulary. The major difference between them are the structures of each character. In most cases, Traditional Chinese has a more complex structure. The chart below can give you an idea about the differences.

Even though the two writing systems looks so different, people from the different writing systems can still understand each other 90% of the time. This is because Chinese is a logogram language. Since the characters have meaning, people can read and decrypt the articles written in another Chinese format without too much effort. The shared grammar and vocabulary also helps with reading. However, when it comes to writing by hand, most people can only write in one of the systems due to the complexity of Chinese characters (you have seen the chart above, you know what I mean). There is not too much to worry about when typing on computers, most office software has a built-in function for switching between Simplified and Traditional Chinese with just a few clicks.

When considering what kind of language writer to hire, it depends. For most positions, both simplified and traditional Chinese writers can carry on perfectly. The distinction would only be necessary in some specific cases. For example, Chinese font designing tasks or brand localisation campaigns.

Mandarin, also called ‘standard Chinese’, is used in schools and universities across all official Chinese speaking countries and regions. Cantonese is a dialect used in southern China, Hong Kong and Macau. In day-to-day life, most people in mainland China, Taiwan and Singapore speak Mandarin. However, the majority of people in Macau and Hong Kong use Cantonese. When people describe themselves as a “Chinese speaker”, they are likely mean Mandarin, but it is always worth clarifying with them.

Due to the huge difference between Mandarin and Cantonese, people who only speak one will not necessarily understand people who speak the other. Mandarin is generally more adaptable since it has been used more widely in education and so there is a higher chance for Cantonese speakers to understand a Mandarin speaker. However, they can understand each other by writing in most cases.

The decision between hiring a Mandarin or Cantonese speaker will depend on the nature of the position. For example, a role’s client base combined with the frequency of spoken communications would impact on which you would require.

To sum up, Chinese has two systems for writing. Both Simplified and Traditional Chinese writers can work for most Chinese reading and writing positions. However, when it come to spoken Chinese, a candidate’s fluency in Mandarin, Cantonese or other dialects may need to be considered based on the requirements of the role.