Iceland’s Linguistic Legacy and Poetic Past 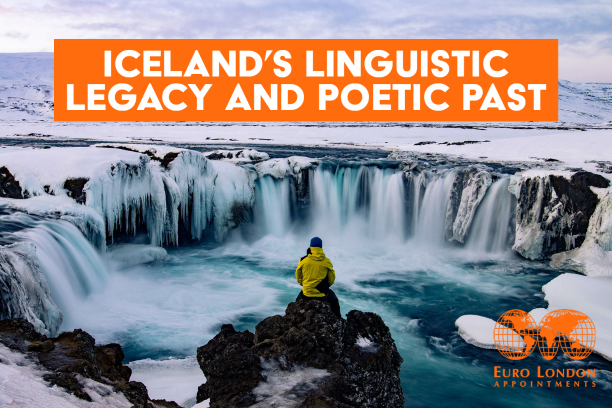 Languages are fickle, aren’t they? Complex, often breaking their own rules, fervently attached to our concepts of self and others around us. For most they are a daily dose of the human experience, though considering how far back our human (and near-human) ancestors roamed the planet and communicated, a relatively recent concept. In the sense of the way languages are now categorised and standardised, labelled and measured as if they aren’t just a bunch of sounds that in more recent centuries have been represented by symbols on parchment, paper, and screen.

Try to picture a conversation with the first humans to leave the cradle of humanity and venture towards the frozen lands of Western Eurasia. Or explaining the concept of an office job. Try to picture telling a story to an ancient Assyrian farmer about your issues with the English subtitles for a popular Korean Netflix series.

Even if the individual words existed to explain these abstract concepts, the meaning behind them would surely be absent. Despite vast differences in our lives and those of our ancient ancestors, there would be some familiarity. Understanding through body language, food, rhythm, and music could potentially be achieved.

After all, you don’t need to understand the lyrics to enjoy the song, right?

Music is another intrinsic part of the human experience, and technology making the world a smaller place allows cultures, styles, and musical genres to mix. This is the reason you can find bands making Country-Western music in Nigeria, Ska-Dub bands in Ukraine, Heavy Metal groups in Mongolia, and a thriving rap scene (encompassing all sub-genres within the umbrella) in Iceland.

On a personal level this last example is the most curious of all because an island on the far northern periphery of the Western cultural conscious is the opposite of the social conditions that birthed the musical movement.

The hip-hop scene originated in and around the 1970s in populated urban areas of the US, applying spoken-word poetry to popular instrumentals, and frequently political voice for marginalised African American communities. Time went on, unique regional styles emerged, and today the scene is more commonly associated with party music rather than speech against oppression.

But the poetic origin of rap is crucial to understanding how an island famous for puffins, glaciers, and geysers became a hub for the scene, despite having a total population smaller than that of Sheffield. Iceland is a world away from the difficult life of US’ cities.

According to the OECD Iceland has a poverty rate of 4.9%, the lowest out of all 38 member countries, compared to a median of 11.1%. According to the Global Peace Index 2022, and for every previous year for the past 14 years, Iceland has the prestigious title of the ‘safest place to live in the world’.

The everyday problems that Icelanders experience are vastly distinct from those of the scene originators, but rhythm and music have no language. In interviews, young Icelandic musicians credit the long polar nights as the main source of inspiration in researching and producing their unique sound.

Equally as crucial is Iceland’s linguistic legacy and poetic past, for in the times before literacy (which arrived on the island with Christianisation but wouldn’t have been relevant to the general population until much later). Alliteration, rhyme, and wordplay were the best ways to tell, retell, and remember legends and stories over multiple generations. The development of a language to suit these ends before it was ever written down leaves a lyrical form of speech. Medieval activities like flyting, a back-and-forth art of delivering insults in poetic verse between two contestants with an audience, is essentially what we would now call a rap battle. Even when you can’t understand the lyrics of these songs, the artful styles of language manipulation are evident by just listening.

A few years ago, this scene was mainly underground. Forgotten Lores was a group founded in 2000, and really helped launch the hip-hop scene in the Icelandic language, performing over ‘old school’ beats and gaining an international following thanks to the island becoming a popular destination for Music Festivals. Groups like Reykjavíkurdætur (Daughters of Reykjavik) began with a gritty sound with (I’m told – although also evident in their older music videos) anti-patriarchal content. However, the traction that they have gained meant that this year, 2022, they were almost chosen to be Iceland’s entrants for the Eurovision Song Contest.

When you think about it, Iceland is linguistically the most likely place in the world to have a rap scene; it has been bubbling away under the surface like the fagradasfjall volcano.