My 5 most beautiful but untranslatable Portuguese words. 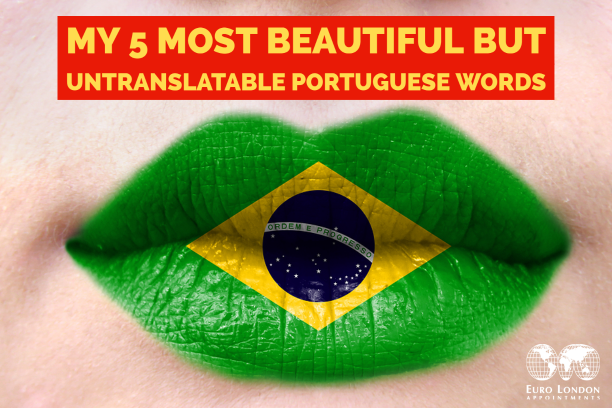 Since moving from Brazil to London and learning how to speak English, I started realising that sometimes I could not fully express myself. At first, I thought my vocabulary was lacking… and that was the case most of the time in my first year, at least! But then researching and asking around I realised some words just do not translate. You can explain the meaning with other words but that deep feeling of the word just does not come across.

Don’t get me wrong, this is not a privilege of Portuguese speakers only. Back in Brazil, we adopted many English words, either for fun, marketing or simply because it would take a while to say it in Portuguese. Such as “brainstorm” or saying something is “top” to mean something good.

So here are my 5 words I wish I could translate to English:

It’s a mixture of longing for a person, place or pretty much anything in the world and nostalgia for someone or something that is no longer near or with you, whether its absence is temporary or permanent. This prominent word is used by Portuguese speakers A LOT.

Rough translation: I haven’t been to Brazil in almost a year and I’m dying of that longing feeling.

The act of running your fingers through someone’s hair — yes, there’s a word for that. However, this one may only resonate with Brazilian Portuguese speakers.

Rough translation: I wanted you to run your fingers through my hair.

It is a word we use to call someone or something that smells good. Sounds simple enough… you could say someone “smells good”, sure! But it just misses the feeling of having that specific adjective to be an antonym of “Smelly”. It is more intimate than that, so careful when saying it to a person you are not dating!

Prettiness, used as a noun to describe someone or something, and even at times as a term of endearment. When speaking English, we would never call someone “prettiness” — a “beauty” perhaps, but never the former. The two words just simply don’t carry the same weight in both languages.

If you add -inho to the end of almost any word in Portuguese, it’s essentially the English equivalent of adding “little” before it. It makes the word “cute”, and it can take the harshness away of certain words.

Rough translation: Give me a little kiss!

Now reverse that… If you add -ão to the end of almost any word in Portuguese, it’s the English equivalent of attaching “big” before it.

Rough translation: My big love! Or my “big boo”.

While there may be literal translations of some of these words in English, the way that they’re used in Portuguese gives them their own unique meanings — which is why we’ve included them here.